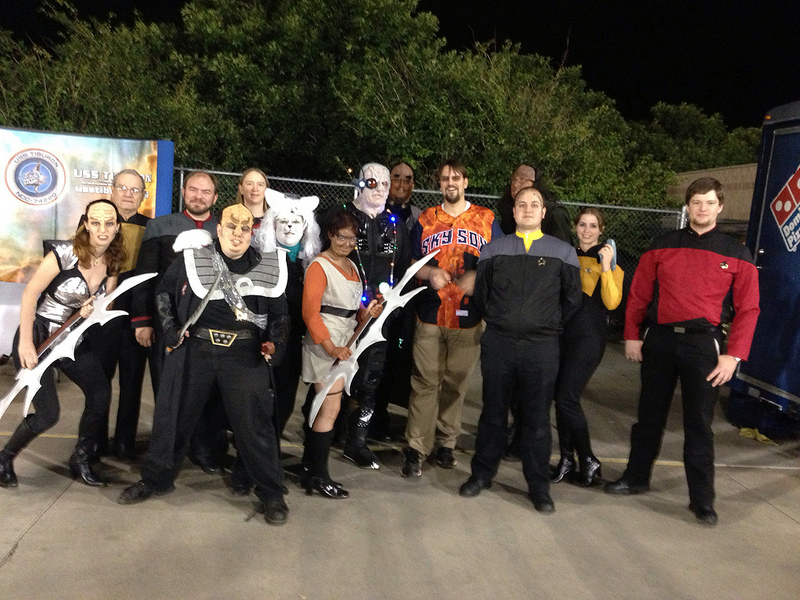 Last February I got an email that I was sure was a fake.  It was from the Sky Sox, the Colorado Springs Minor League baseball team. It said that they were planning a Star Trek theme night, and they wanted help from the USS Zebulon Pike!  At this point we had only submitted our paperwork to start our shakedown cruise four months earlier, so the idea that such a young ship would be selected for such a project had blown my mind.

I immediately called back Jon Eddy, the events coordinator and we started the process of planning this night out.  Over the next several months we got other chapters of STARFLEET involved in the project and we brainstormed a storyline.

This last weekend, on August 24, we got to fully realize our plans.  This is our story.

Captain’s log, stardate 11308.06, we just intercepted a message from a rogue group of Klingons.  The message contained a news report from Earth on the early 21st Century, reporting about an alien artifact that was found underneath a baseball stadium.  The transmission was a directive to set course for Earth.  I can only assume they discovered a way to travel through time in their Bird of Prey.  A copy of this transmission is available here.

There were four ships in the region who were able to assist in defending Earth from the Klingons.  The USS Zebulon Pike, USS Tiburon, USS Wind Spirit, and USS Pioneer all assisted by providing personnel.

Unfortunately we could not replicate a temporal anomaly that was both stable enough, and large enough for our ships to enter.  So instead we had to settle with sending a couple of shuttle crafts through with crew members from each ship.  In total there were about 18 STARFLEET members on this away mission.

We did not find the alien artifact, but from analyzing the video we suspect we know what the alien technology is.  If we are correct, we cannot let the Klingons get this artifact. After searching the stadium during the ball game we failed to find the artifact, so we decided to go to the field.

We were only on the field for a few moments when the Klingons arrived, Bat’leths and Disrupters in hand, and a Bird of Prey in orbit.  Being unable to do anything against such a force, we had to fall back and wait for our reinforcements to arrive.

And then the lights went out.  And the crowd went wild, screaming and throwing insults as our fears were confirmed.  Onto the field walked a Cardassian Borg.  And with it, a Borg cube arrived in orbit over the stadium.

The Klingon Bird of Prey tried to take it down, but it was no match for a Borg Cube.  Our tricorder detected a temporal disruption forming, which could only mean that our fleet was working hard at getting through.  We had to hold off the Borg for a few more minutes, which meant we needed some help.  We needed someone who knew the land and knew where to find weapons.

We only had one choice, to recruit some help.  We ended up recruiting a local, a giant talking Fox named “Sox the Fox”, to help.  Sox’s familiarity with the layout of the stadium and its defenses made him instrumental in helping to defeat the Borg.

Sox knew how to launch the missiles but was intercepted by the Borg.  In the end we were able to lure the Borg away from the missile launcher we beamed Sox the Fox to the other side of the field where he was able to hit the big red button.

The fleet managed to come through at the same moment and together the Borg cube was destroyed.  The day was saved and we celebrated with Fireworks.

Overall our entire group had a great time doing something that we likely never would had gotten to do if we were not a part of STARFLEET.  And we even got to recruit a few new people to our chapter as well as meet a couple of new people who joined SFI but had not yet had a chance to meet.  Anytime we can get together with our fellow STARFLEET chapters it is a good time.