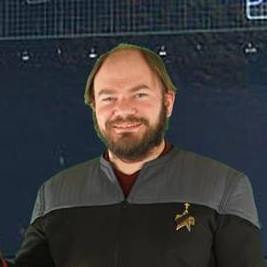 1. Who is your favorite Star Trek Character (major or minor)?

Probably Data. He is intelligent and methodical in everything he does, while struggling to become more than he is. He tries to be more human without going out of his way to “fit in”. And any episode focusing on him is usually awesome.

2. What is your least favorite Star Trek episode and why?

Justice – The Next Generation.

First you would think that before just letting their crew run rampant on a planet with a new civilization they would make sure they knew what local customs and rules they had. Then the civilization has the death penalty for every little infraction, even ones caused by accident, seems like it would kill off most of its population before long. And then they want to kill one of their visitors when they never explained the rules? It did bring up some interesting points but overall the episode was a little annoying.

3. What drew you to Star Trek?

Space, exploration, sci-fi, and a bit of a military feel. What isn’t to like when you’re a kid? I never got to watch Trek often though, because my dad didn’t watch it and he usually controlled the TV. But on those times when I was able to find it on I watched it.

4. If you could have any holodeck adventure, what would it be?

5. What is your favorite hobby outside of Star Trek?

Writing! Getting together with my writing group to write. Also I enjoy reading, going to movies, hiking, photography, webmastering, programming, and RC cars. But mostly writing. grin emoticon

6. What is your goal for USS Zebulon Pike? Why did you start the group?

And as a secondary goal I wanted the group to branch out and try different things around the city, to get plugged in and help others.

7. Which is your favorite Trek and why?

TNG because it’s what I grew up watching. And I like Picard and Riker as leaders, they work well together in how they lead their crew. I liked the chemistry there.